In the middle of these unprecedented times I’ve been twiddling my working prospects in a new light. I have rarely been as silent on social media as in the recent times. It has been scary to think about the world, all these fundamental questions. In January however, the publication horizon loomed The Essence of the Music Business:Philosophy and its Second Edition. It seemed to be the next sensible step, but also a calling.

Some of you already know my calling – being an artist manager. You probably recall that I took a break from those duties – to be able to write The Essence of the Music Business trilogy. I returned as manager with Melba Culp last February. I am still busy with them. Last summer, Gentle Savage joined the roster. These gentlemen brought with them the original cause, the calling. When I had that break from management, I had time to re-evaluate things. I made a promise to myself, I will continue to take artists who have a similar calling and fire that I feel I having. Never two without three.

Now to that call I mentioned. My phone rang in February and the other end was Vin Valentino from Delta Enigma. I already knew him, as he directed three videos to Annika Nord, an artist with whom I had collaborated. To be honest, I didn’t even know he had a band. Didn’t take three minutes longer and I was sold! I had once talked to him about music videos before. I remember being fascinated about his energy and passion of his work. When we started to talk, after seeing their unreleased Waterfall music video – I almost begged to get involved. This was exactly I was longing for – a reflection to this calling. Now, a couple of months later that Waterfall will be released. 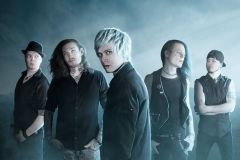 What I am trying to say. These unprecedented times can also be used for one that would otherwise left undone.